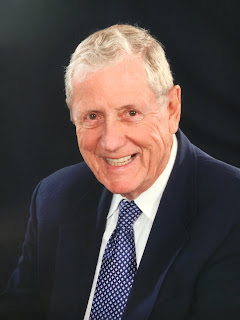 Thomas E. Brennan, Sr. died peacefully on September 29, 2018, in Lansing, Michigan surrounded by family. He was 89. The family has shared a funeral program, including the full homily by Rev. Michael Murray and a reflection by Thomas E. Brennan, Jr.

In 1951, he married the love of his life, Pauline Mary (Polly) Weinberger, with whom he had six children. Immensely proud of his large Irish Catholic clan, Brennan often involved family in his various professional pursuits, from political campaigns to the inception of the Thomas M. Cooley Law School. He was quick to credit Polly’s invaluable support for virtually all of his success.

Even so, success did not come easily in the early years of Brennan’s political career. He failed two attempts as a candidate for the Michigan House of Representatives in 1952 and 1954 and lost to John Dingell, Jr. for the U.S. Representative from Michigan’s 15th congressional district in December 1955.

In 1953, he joined the law firm of Waldron, Brennan, Brennan, and Maher, with whom he worked until 1961 when he was elected to a seat on the Common Pleas Bench. In 1963, he was appointed by Michigan Governor George W. Romney to the Wayne County Circuit Bench, and in 1964 he was elected to that same position.

In 1966, at the urging of Governor Romney, Brennan sought the nomination of the Republican Party as Associate Justice of the Michigan Supreme Court. He won the nomination and the election. In 1969 and 1970, Brennan served as Chief Justice, the youngest Justice to serve in that capacity.

While serving on the Bench, Brennan received numerous requests for law school recommendations which inspired his vision for a new, non-profit law school in Lansing, Michigan. Noting that many qualified students were refused law school admission, he was determined to eradicate academic elitism and make legal education accessible to all capable students. Brennan incorporated Thomas M. Cooley Law School in 1972 with the belief that “An educated citizenry that understands the law is critical to the strength and progress of the nation.” Brennan left the Supreme Court on December 6, 1973, to dedicate his professional career to the fledgling law school and ensure its success. Brennan served as first Dean of Cooley Law School until 1978, when he became its first president.

Under his magnetic leadership, Cooley Law School grew from its initial class of 76 students to become the largest accredited law school in the nation. Known for ingenuity and perseverance, Brennan designed and instituted numerous unprecedented innovations, including the law school’s year-round schedule that allowed multiple first term classes to start each year. He is credited with founding the Cooley Legal Authors Society, the Student Bar Association, the Scholastic Review Board and the Thomas M. Cooley Law Review. He also composed the law school’s alma mater.

Combining insight and levity, Brennan was a captivating orator and engaging storyteller. He authored a self-published novel entitled The Benchin 2000, a memoir called Starting a Law School in 2007, a book entitled The Article V Amendatory Constitutional Convention: Keeping the Republic in the Twenty-First Century in 2014, and a blog, oldjudgesays, which ran from 2008 to 2017. New ideas energized Brennan, whether he was striving to establish a United States Constitutional Convention or trying to develop an American Golf League. An avid golfer, Brennan made a hole-in-one on five lucky occasions.